After spending some time as a jazz tenor saxophone player Karl Young embarked on a ​​career as a physicist and chose to satisfy his musical yearnings with an intensive study of the shakuhachi or Japanese bamboo flute. Over the past 20 years he has studied with a number of teachers; his primary sensei are Kaoru Kakizakai and Riley Lee, both masters in the dokyoku tradition and students of Katsuya Yokoyama. While his focus has been on the traditional solo honkyoku repertoire or 'original pieces' in the dokyoku tradition he also plays sankyoku or traditional ensemble music with shamisen and koto in addition to minyo or Japanese folk music. He is co-founder of the group Ensohza formed in 2006, specializing in  traditional minyo and Japanese folk dance, in which he plays the shinobue or transverse bamboo flute as well as the shakuhachi. He couldn't help wandering back to his roots and recently worked with jazz flutist Ali Ryerson on developing an approach to jazz shakuhachi. He subsequently released 'Lost In The Wood', a CD of jazz standards and original pieces in an exploration of the expressive possibilities for shakuhachi in jazz. He has recently been playing jazz in various ensemble formats around the San Francisco Bay and Mendonoma areas. In addition he enjoys playing with poets of various stripes (haiku, tanka,...) and has played in a variety of non-traditional settings for shakuhachi such as with the Ernst Bloch Bell Ringers and the Anchor Bay Children's Choir. For his strange views on philosophy/science/spirit check this out. 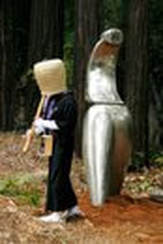